The Art of The Boss Baby

The Art of The Boss Baby is the official art book of the film The Boss Baby. Published on February 7, 2017 ahead of the film, it was written by Zahed Ramin, with a foreword by actor Alec Baldwin, a preface by director Tom McGrath and an afterword by Marla Frazee, the author and artist of the book on which the film was based. The book includes storyboards, character sketches and other development art, as well as interviews with McGrath, writer Michael McCullers, producer Ramsey Naito and other members of the crew.

A beautifully illustrated look at the art, design and making of DreamWorks Animation’s upcoming movie Boss Baby, a family film about a young boy and his fast-talking, corporate-type baby who have to fight the evil plot of the CEO of Puppy Co. to save the world.

Go behind the scenes of DreamWorks Animation's smart and hilarious comedy called The Boss Baby. In one of the most anticipated comedies of 2017, a young boy named Tim feels there is something unusual about his baby brother from the day he arrives ... in a taxi, and speaking with the voice of Alec Baldwin. The two brothers embark on a sibling rivalry battle for the ages, but then must work together when an unexpected adventure takes them to places they can’t imagine. 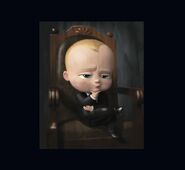 Add a photo to this gallery
Retrieved from "https://bossbaby.fandom.com/wiki/The_Art_of_The_Boss_Baby?oldid=3138"
Community content is available under CC-BY-SA unless otherwise noted.